Trying to make the world happier by posting and sharing mostly positive and exciting moments from my life, today I feel the inevitable need to share something different. I'm writing this in English for not only my literate citizens but also the world to read about the system and society we live in.
It's been 3 years now since I live in Ohrid, Lagadin where I work in tourism, after 13 years working & researching in that field in Macedonia and abroad (Turkey, Croatia, Malaysia, China, USA, Africa).

More than a month ago all inhabitants and property owners of  Lagadin village signed a petition against a Government's project for cruelly destroying protected natural heritage around Lake Ohrid, specifically against the current project for building a Mediterranean beach on the Lagadin coast line.

Referring to existing laws and quoting scientific experts, the petition states that this part of the lake (as most of it) needs to stay untouched in order to prevent dislocation and extinction of endangered flora and fauna species.
The reed belt in the area disturbed by the project, is the home of the mute swan, several kinds of fish, birds, insects – part of the 200 endemic species found only in Lake Ohrid and nowhere else in the world.

Lagadin coastline comes very close to Mt. Galičica, a National Park recognized by the International Union for Conservation of Nature (IUCN) and protected by law since 1958. Thanks to the several hundred original rarities and the protected plant and animal species, the Park has been internationally recognised as an Important Plant Area, a Primary Butterfly Area, as well as an Emerald Site, meaning that, in the future, it will form part of the European Natura 2000[1] network. The extraordinary biodiversity and the international significance of the Galičica National Park was further validated in 2014, when it became part of the UNESCO World Network of Biosphere Reserves.
The petition also relies on facts relating to the economy and financial justification of the project. Namely, statistical data by one of the largest tour operators bringing most of the foreign guests in the country, say that this beach is mostly visited by families and groups of older people. Now as well as 50 years ago, foreign tourists visit Lake Ohrid because of its natural and cultural heritage and not the "quasi -Mediterranean beaches". The main tourist groups visiting Lake Ohrid, especially Lagadin coast are willing to enjoy their peace in a rural and eco-friendly environment.  Both old people and parents with children are struggling every day to cross a 5m wide street, running away from the loud commercial beaches.

At the same time, Lagadin Local Community has been for years now sending requests to the Ohrid Municipality for resolving safety issues around the neighborhood.  Street lighting for ex., is something that every person pays for but doesn't always enjoy its service. A sign with speed limit 40 is almost non-existent visually. A new document asking for providing the area with basic signalization was archived today (18.06.15) by the addressed institutions.  So far in the past 3 years, it never got any answer.

Few days ago another shocking scene. The Government elite's convoy is passing this way with 100km/h, setting a great example for their people. The rules are made by those who never obey them. The purpose of the visit was an opening ceremony for a reconstructed asphalt road in the nearby village of Elšani. At the moment when we thought that the Government might have an ear for Lagadin's arguments and their demands to be erased from the megalomaniac project list, we hear in the news the announcing of the Mediterranean beach in the same manner as the promised road to the people of Elšani village was announced. How ironic and disrespectful!

Macedonia is facing major problems, large economic crisis with high unemployment rate, and financial instability, disordered existing infrastructure and political separation. Many people would agree that €1.350.000 for a Mediterranean beach in Lagadin is not a priority and is economically disapproved for the current budget of our country. Just like the €500.000 palm trees. Or another €55.000.000 for the projected express way passing through the Galičica National Park, destroying the last piece of Ohrid’s natural identity.

What's next:
We keep up the good beats by educating young generations. We will capture the image of today and spread an SOS message to the world. We will need your help!
21 of June is the day of the lake. A group of activists, Citizens' initiatives and NGOs will celebrate it through sports, creative, and educational workshops around Lake Ohrid and Mount Galičica. Join us if you can or support us by signing the international petition we will publish on this day (21 June) for saving the UNESCO cultural and natural heritage of Ohrid! If you’re an expert, you can support our struggle for Lake Ohrid by signing the Declaration for its preservation according to the recommendations by UNESCO, international conventions, and national legislation. Links and further details on the Ohrid SOS FB page. 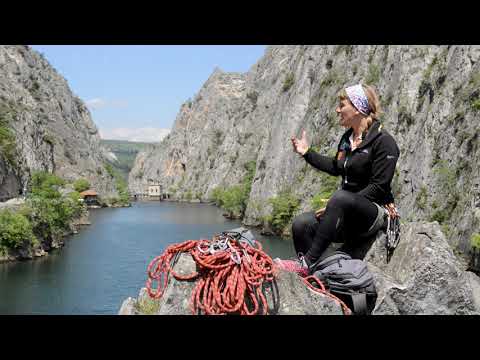